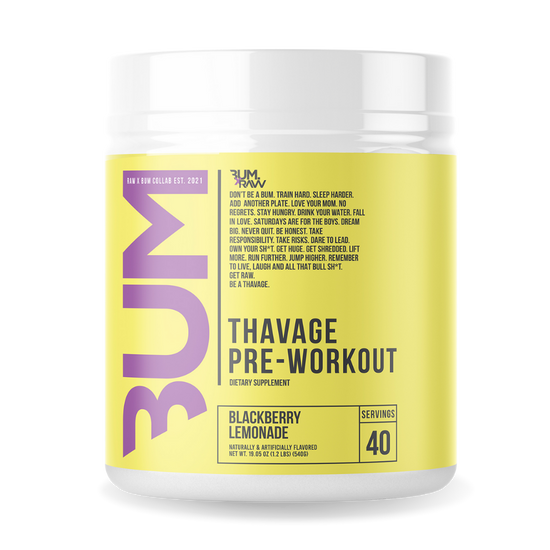 Designed by Thavages for Thavages to take your performance to the next level and engineered with some of the industry's most trusted ingredients to improve cellular hydration, mental focus, energy, blood flow AND fat burning!

Designed by 3 x Mr Olympia Classic Physique Chris Bumstead this is not your run of the mill pre-workout and has been designed with industry leading taste profiles.

Betaine Anhydrous: It has been suggested in clinical studies to improve muscle strength and power production. Betaine also increases levels of SAM-e, which have been linked to improved mood and cognitive function.

L-Tyrosine: Tyrosine is a non-essential amino acid and a precursor for epinephrine and dopamine. These chemicals primarily produce alertness, increased energy and improved mental focus.

Alpha GPC: Alpha GPC raises levels of acetylcholine, a key chemical used for focus, learning and muscle contraction. Alpha GPC also supports the integrity of cellular membranes and is being studied for its purported performance enhancing properties in athletes.

Huperzine A: Huperzine A is known as an enhancer of mental focus and energy due to its ability to prevent the breakdown breakdown of Acetylcholine.

The information provided on this webpage is not intended to be medical advice or to replace professional medical advice, diagnosis or treatment.

This product should not be used to treat, cure or prevent any medical condition and is not to be used for therapeutic purposes (unless the product has been entered on the Australian Registrar of Therapeutic Goods).

We make no guarantee as to the results that you may experience from using this product or the information we make available on this webpage. Your results will depend on many factors, including but not limited to your age, gender, other products used, health history, exercise regimen, lifestyle and diet.

Please check with your health practitioner before making any changes to your diet or taking supplements, especially if you are pregnant, lactating or have a health condition. Always read directions for use carefully.